What is Tang Soo Do | American Family Martial Arts 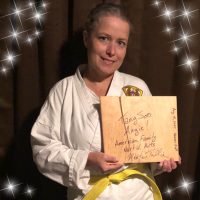 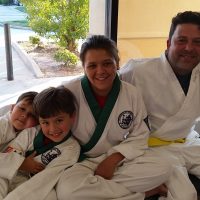 What is Tang Soo Do

You’ve probably heard of Tae Kwon Do. Maybe even Kung Fu. What in the world is Tang Soo Do martial arts?

American Family Martial Arts practices a style of karate called Tang Soo Do. It is a Korean form of martial arts or karate. Karate generally refers to a Japanese based style of martial arts. The full name of the art is actually Tang Soo Do Moo Duk Kwan. One of the more famous practitioners of Tang Soo Do is Chuck Norris. 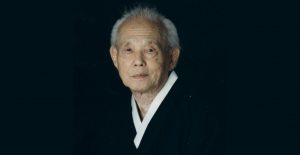 Moo Duk Kwan is actually the name of the school that Grandmaster Hwang Kee founded in 1945, when he took a new approach and applied scientific method to traditional martial arts, thus establishing the modern art of Tang Soo Do.  A “kwan” in Korean literally means a building or hall, but when used in martial arts refers to a school or clan of martial arts who follow the same style.

Moo Duk Kwan roughly translates as “Military-Style School”, and some organizations that teach Tang Soo Do refer to their art in this way as a reflection of the original philosophy of intense training for self-defense.  The majority of those that call it Moo Duk Kwan are practitioners in Korea where the Moo Duk Kwan was founded.

One of these people was Hwang Kee who is credited with founding what we call Tang Soo Do sometimes called Soo Bahk Do.  During the Japanese occupation, students were forced to train in secret.  Hwang Kee left Korea at this time and ventured into Manchuria. There he came into contact with the Chinese Tung System.  Hwang Kee eventually incorporated the flowing and graceful motions of the Tung system with the linear, strong movements of Karate Do and the diverse kicking of taekkyeon. This blend resulted into what is currently known as Soo Bahk Do. 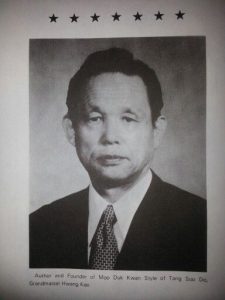 Tang Soo Do is the most common name for our art. Firstly, because it is the original name by which Grandmaster Hwang Kee called the art upon his return to Korea and the founding of the Moo Duk Kwan.  The other reason for the popularity of Tang Soo Do for the name of our art is because it is the name that was in use by Grandmaster Hwang Kee when various instructors left his organization to form their own.  And by the way “tang” is pronounced “tongue” like in your mouth not the tang of a knife.   And “do” is pronounced like doe as in a deer.

“Do” (pronounced like doe a deer) roughly translates as “The Way” and “Soo” (pronounced like sue) translates “Hand”.  There is debate around the word Tang, which some say translates “Strike and Defense” while others say it is merely a reference to Grandmaster Hwang Kee’s stay in China during the Japanese occupation, where he was studying the Tang styles of Chinese fighting.

You may be wondering where the name Soo Bahk Do comes in.  Soo Bahk Do roughly translates “The Way of the Unarmed Weapon” or “The Way of Unarmed Combat”.  Grandmaster Hwang Kee changed the name of the art within 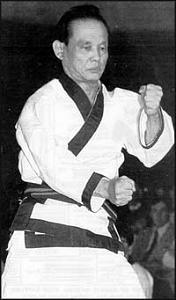 the original organization in the late in the twentieth century.  Soo Bahk Do is name that more closely follows the tradition of Korean martial arts as Soo Bahk was the name of the style that Grandmaster Hwang Kee was a master of before his stay in China.

When you enter or exit the dojang (training hall) at American Family Martial Arts, you will hear & see students bow and say Tang Soo! It’s our unique way of giving a spirit yell!