Master Tullier has been teaching and owning a karate school for over 20 years. He’s seen a lot of sparring in his days and competed at MANY tournaments. One thing he knows for certain -sparring gear protects both the fighter AND the opponent. And it’s required by our insurance company.

The sparring gear we sell at American Family Martial Arts is produced by Century Martial Arts, a leader in karate equipment since 1976.

And it’s not just head gear. Sparring gloves protect the wearer from injury as well as the opponent from severe bruising. Same with foot gear. Of course mouthpieces protect those pearly whites.

Sparring is hitting people, and the gear is there for the safety of your opponent, not just you. If you want to hit our people, you use our gear. The only way we can monitor this and be in control and know that nobody is bringing unapproved gear on the mat is if the gear is ordered from our approved vendors.  THIS IS A SAFETY ISSUE and is required by our insurance company.

Of concern is any type of repetitive head injury that can lead to concussions.  Sparring at American Family Martial Arts’ classes is controlled and monitored to reduce the risk of any type of injury. But things do happen and not just in the dojang. We have a youngster recovering from a severe brain injury after a fall from a swing. You can learn more about concussions here: HEADS UP for parents.

I’m sure you’ve heard the slogan “support your local business?” We’re about as local as it gets. As a family owned business, it’s the sole source of income for the Tullier family and American Family Martial Arts employs 2 full time team members plus 3 part time instructors. It may not seem like a big deal when you click that button to purchase something online but it does cut into our bottom line. 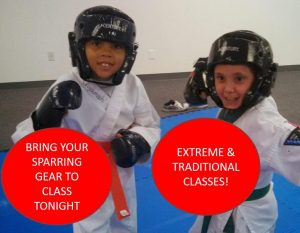 Ever bought something online and discovered it didn’t fit? Ordered a different size and it still didn’t fit? Sure, most places nowadays have a free return policy. But there’s the hassle of getting a box, taking it to be mailed, then waiting on the new item.

We measure you BEFORE we order the gear and when it comes in, make sure it fits. If it doesn’t, we re-order at our own cost until it’s right. We have an adult student that it took 4 tries to get the right fit for him! Even though we measured, for some reason the head gear just fit his head oddly. But we did get it right!

For safety and developmental reasons we don’t introduce sparring until our Extreme Skillz classes, ages 10-14. In our younger age classes, they do work on fundamentals such as drills and basic techniques but impact and contact is minimal. Anyone attending our extra sparring classes is also required to have proper sparring gear. 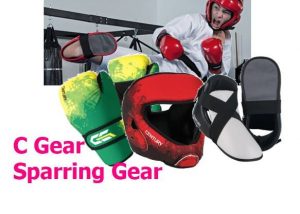 And you know what? We have some pretty cool gear to choose from!