WRITTEN BY https://www.desumama.com/5-benefits-martial-arts-kids-girls/
by Vanessa Bell

I enjoy sports and [am] a martial arts enthusiast. My 7-year-old son has been training in martial arts for 3 years. The benefits of martial arts for kids includes great characteristics and life lessons and I recommend the various practices to anyone I chat with. During this time, I’ve also watched young girls develop along with him. Some girls were already athletic, assertive and excelled from the beginning, while others had difficulty breaking out of the social confines of “girliness.” 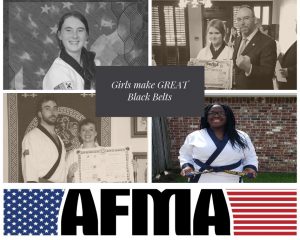 Kids in martial arts are expected to behave in ways not innate [or taught] for some girls (not all!), like yelling, striking and motioning their bodies in ways that are typically reserved for boys. Gradually, with trust, guidance and challenging 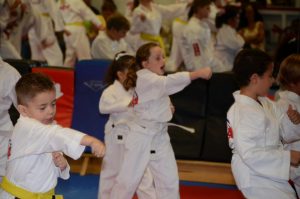 instructors, I’ve watched as some of these same girls became fierce competitors and athletes. The best martial arts for women are the ones that encourage growth!

Benefits of Martial Arts for Children not just girls!

#1 Psychological Benefits:  In a society that’s obsessed with pop-culture and celebrity, martial arts provides a grounding environment for kids, girls especially! They receive many cognitive, social and emotional benefits that translate into other areas of life. The structured, authoritative nature of traditional martial arts instills focus, self-control, listening skills, and discipline. Students bow and acknowledge instructors, but also to opponents before and after competing. This practice demonstrates respect, humility, and honor… character values that are hard to find in the images fed to our youth through media and elsewhere.

Martial arts for kids is an opportunity to build social skills, friendships, and camaraderie with peers, who if nothing else, have one thing in common. They become part of a “dojang”, and a greater martial arts community. There’s also the potential for mentorship from a trusted, positive instructor.

#2: Physical Fitness and Skills:  Martial arts can be a way for girls to become physically fit and healthy. All of the particular styles incorporate conditioning into their training, in addition to learning the skills. The athletic abilities developed in martial arts carry over into other sports. These abilities include muscular strength, speed, and agility, endurance, flexibility, coordination, and balance.

Karate, Taekwondo, [Tang Soo Do] Judo, Boxing and Wrestling are forms of martial arts that are also Olympic sports that girls can participate in. These, along with Jiu Jitsu, have junior leagues and opportunities to compete in local, national, and international competitions to further inspire girls to participate in martial arts. The benefits of taekwondo versus other disciplines are seen more greatly in the physicality of the sports, but the social aspects are all similar in nature.

RELATED: 5 REASONS TO COMPETE IN A TOURNAMENT 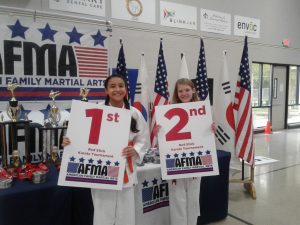 #3: Self-Defense: There’s special confidence that comes with being able to defend yourself. This is empowering regardless of gender. Though physical bullying has always been a problem, girls seem to be assaulting other girls more than 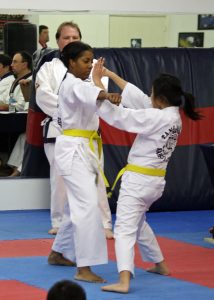 ever. It may provide parents a little bit of relief knowing that your girl can hold her own if confronted with such situations where self-defense is needed. Martial arts for kids help to assert their physical strength. Some practices also employ loud, direct verbal communication and secure body language. Bullies typically target those who seem passive or less of a challenge. When kids know that your girl will speak up and throw down, it’s less likely that she’ll be tested.

RELATED: 6 Tips for Dealing with a Bully

#4: Life Lessons: There are many valuable life lessons that girls learn in martial arts. These lessons build character and provide experiences they can draw from as they mature. As with all sports, martial arts for kids presents opportunities to be challenged physically, mentally, emotionally and overcome adversity. 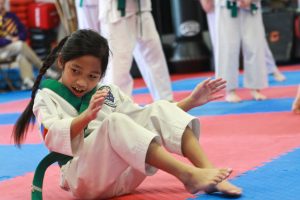 RELATED: Every month at American Family Martial Arts we feature a different life skill. Check out our blog: Be In The Know! And here’s a link to get you started:TEAMWORK

There’s no substitute for the experience of having to compete when you’re tired; or seeing how you respond to an opponent who’s stronger or more skilled. The process of trying something new, learning the skills, practice, and repetition, mistakes, losing, winning are all experiences that girls draw strength from throughout their lives. Kids also learn the values of hard work, dedication, persistence, courage, and resilience. The tangible rewards for all of this are improved skills and being promoted to the next belt level. It’s also an opportunity for girls to learn how much they have in common with boys…and for boys to learn that girls are more than princesses! 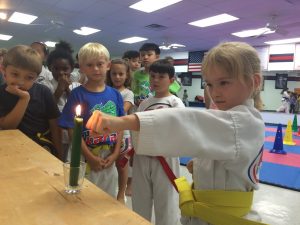 #5: Because it’s cool and fun: The popularity of UFC fighter Ronda Rousey has inspired a generation of girls who probably wouldn’t have taken interest in martial arts. Her background as an Olympic bronze medalist in Judo adds mainstream appeal to the sport, especially among female athletes. And let’s not pretend that punching, kicking, and wrestling isn’t fun. Regardless of what society implies, both boys and girls enjoy playing fighting with parents, siblings, and friends because it’s fun and non-threatening. 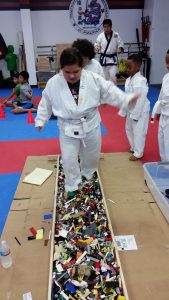 This article is ENTIRELY the work of Vanessa Bell at https://www.desumama.com/5-benefits-martial-arts-kids-girls/